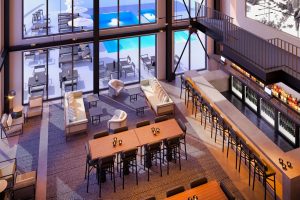 Jackson Hole, Wyoming is renowned for its outstanding skiing and après-ski activities and has no shortage of beautiful lodgings from which to choose. It can be a tough market in which to compete as a hotel, as stand-out facilities such as the Four Seasons and Teton Mountain Lodge have claimed much of the prime Jackson Hole real estate.

Mid-market properties, a category which has seen the death of a number of facilities in recent years, is a niche that could use some reinvigoration and Joseph Cuzzopoli of the VI Group spotted an attractive hotel investment opportunity in the newly reborn Inn at Jackson Hole – a relatively non-descript mid-market hotel that is seeing new life this year as the stand-out Continuum Hotel.

Fortunate enough to be located in an attractive spot in the village, the Continuum Hotel is a first-of-its-kind partnership featuring legendary ski and snowboard action film-maker Teton Gravity Research (TGR), based in Jackson Hole. The hotel is positioning itself as the flagship of a new trend in sleek and stylish Millennial- and Gen Z-oriented lifestyle hotels. Its upscale good looks and functional yet comfortable rooms are meant to attract a relatively younger demographic looking for more than what the relatively staid and more expensive Four Seasons might offer.

Named one the “Five Most Important New Ski Hotels This Winter” by Forbes Life magazine, the Continuum touts being “Teton Village’s year-round home base for adventure enthusiasts that love all things Jackson” with a killer bar and lounge and a fun-loving staff that rocks, adding to the adventure vibe.

This new, exciting take on lodging at Jackson Hole drew the investment interest of Joe Cuzzopoli and the VI Group in large part because it’s dynamic versatility and wide range of features designed to lure visitors of all tastes and interests. The hotel boosts an exhibition kitchen, heated pool complex, fitness center, and rooms ranging from lofts to large suites with kitchenettes. To attract the rapidly growing number of younger adults with pets, the Continuum also promotes being a pet-friendly environment. And since Jackson Hole is such as famous ski destination, the hotel is offering some interesting promotional packages that include life tickets.